While the novel coronavirus pandemic continues to strangle the economy, the Port of Oakland reported Friday that shipping schedules have "stabilized" after a small reduction in voyages.

The Port of Oakland and Oakland International Airport will keep operating despite an Alameda County order for residents to shelter in-place in an effort to contain the spread of the coronavirus, the port authority said Monday evening. 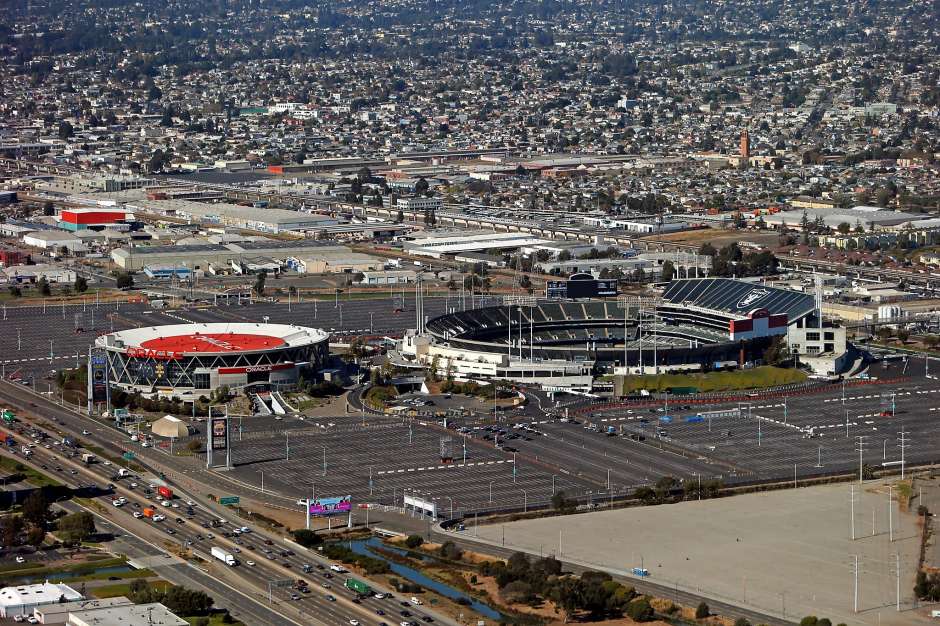 Given a choice, Oakland voters would pick the current Coliseum site over over Howard Terminal to be the home of a new A’s ballpark, according to a new poll.

The poll of 500 voters found 62% favored the Coliseum site, compared with 29% for the waterfront site at the Port of Oakland. The remaining 9% either didn’t know or didn’t care.

The poll marks the first time voters have been offered a straight-up preference question between the two locations.

For all the talk of a pedestrian-friendly new A’s stadium, fans expected to drive | San Francisco Chronicle

For all of the talk of strolling to the Oakland A’s proposed waterfront ballpark, more than half the fans would drive or take Lyft or Uber to sold-out games, adding an estimated 10,000 cars to the already congested area, a study by Oakland’s Department of Transportation concludes.

The report, which is being presented at community meetings for discussion, estimates that 50% of the attendees at a sold-out game — roughly 17,500 fans — would drive 7,500 vehicles to the area and search for parking between downtown Oakland and Howard Terminal, where the stadium would be located.

With all of the construction cranes around town, one may be forgiven for overlooking the permanent cranes on our skyline: those that facilitate the import-export activity at the Port of Oakland and the logistics that support it.

As Oaklanders, we are excited that our city has become one of the hottest places in California to do business and to invest in new residential and commercial real estate development. But amid all this growth, it’s easy to take for granted the most significant and most consistent driver of Oakland’s economic success: our industrial waterfront.

Opinion: What about the black families Oakland A’s would displace? | East Bay Times

As an Oakland resident for over four decades, and as president of the local NAACP, I am proud of our city’s diversity, character and commitment to opportunity for all. Generations of African-American residents have earned a good living working in this community.

That is why I strongly oppose the Oakland A’s proposal to build a new stadium at Howard Terminal, along with the 3,000 luxury condominium units and 1.5 million square feet of office space that team owners are proposing to pad profits. This project threatens thousands of good, high-paying jobs largely held by African-Americans at the Oakland waterfront and will overtake West Oakland neighborhoods with increased traffic and gentrification.

Major League Baseball’s commissioner has put the lie to the Oakland A’s claim that they’re not seeking a taxpayer subsidy for a new waterfront ballpark.

Commissioner Rob Manfred last week threatened that the A’s might leave town and slammed city officials for filing a lawsuit trying to block Alameda County from selling its half-interest in the Oakland Coliseum to the baseball team.

No amount of expensive rebranding and impressive architectural renderings will change the stubborn fact that the only institution historically “rooted” to Oakland’s waterfront has nothing to do with Major League Baseball.

Since 1871, when the Central Pacific long wharf connected the transcontinental railroad to direct deep-sea access, Oakland’s working port has been a worldwide commercial shipping destination. Over 150 years, we have built the Port of Oakland into the economic linchpin for the city of Oakland and the undeniable center of gravity of international trade for the San Francisco Bay Area and all of northern California.

Where there is the allure of the water, there is no shortage of dreamers, visionaries, hucksters, investors, or salesmen willing to expound on the endless new possibilities.

It's a tale as old as time. Which is why some of the oldest land use regulations, notably the public trust doctrine, have survived as basic underpinning notions of western property law. The importance of the preservation of public control and access to navigable waterways and urban waterfronts for water dependent uses, such as commerce, may not be readily obvious to the average citizen, but that doesn't change the basic and indisputable logic and necessity of the rules.

Alameda County supervisors should abandon their plans to sell half-ownership of the Oakland Coliseum to the A’s and instead return to the bargaining table with the city.

Four months ago, the county reached a non-binding agreement to sell its 50% interest in the sports facility to the baseball team. But the A’s aren’t interested in building a ballpark there; they have their sights set on the waterfront near Jack London Square. They want the Coliseum property, which the Golden State Warriors and Oakland Raiders are also abandoning, to make millions on development.