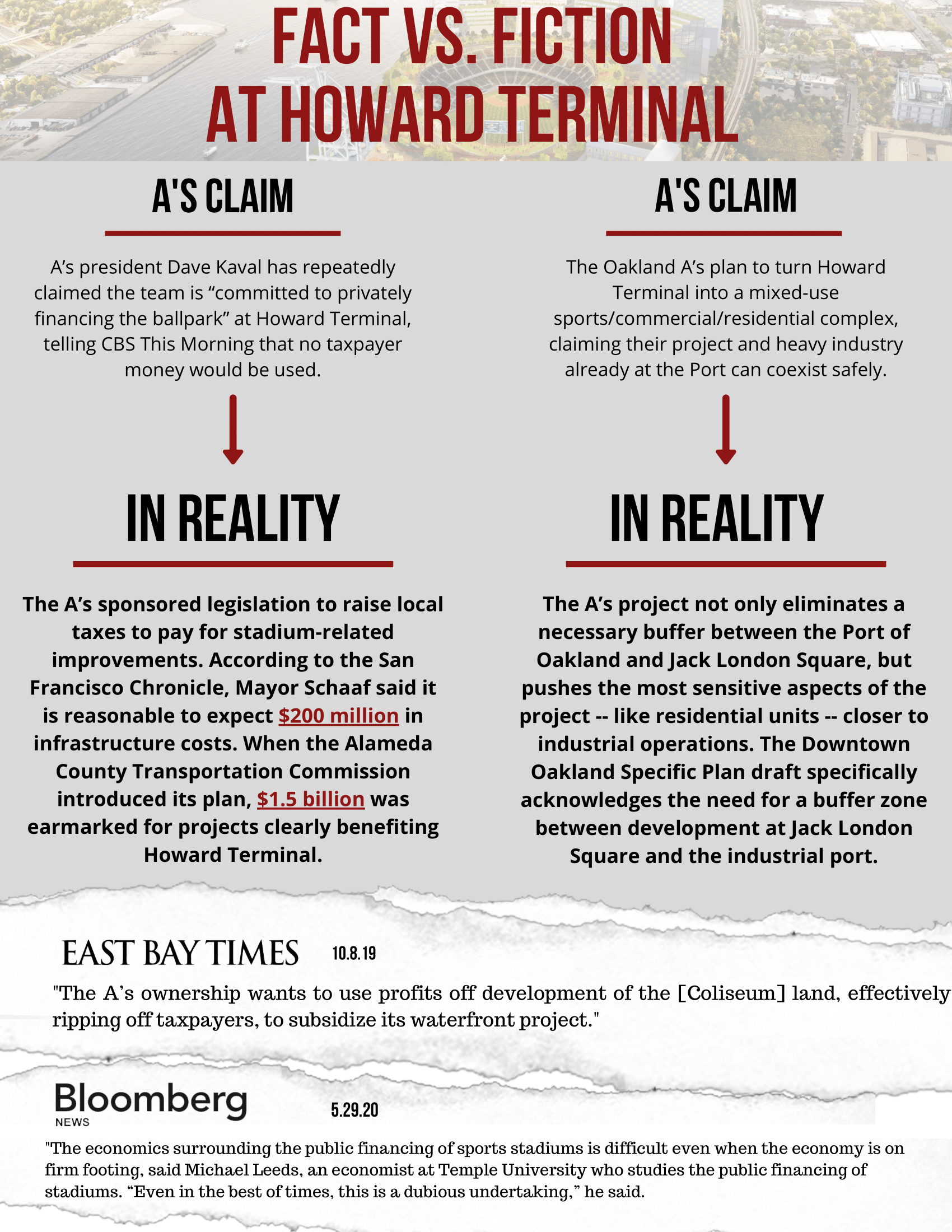 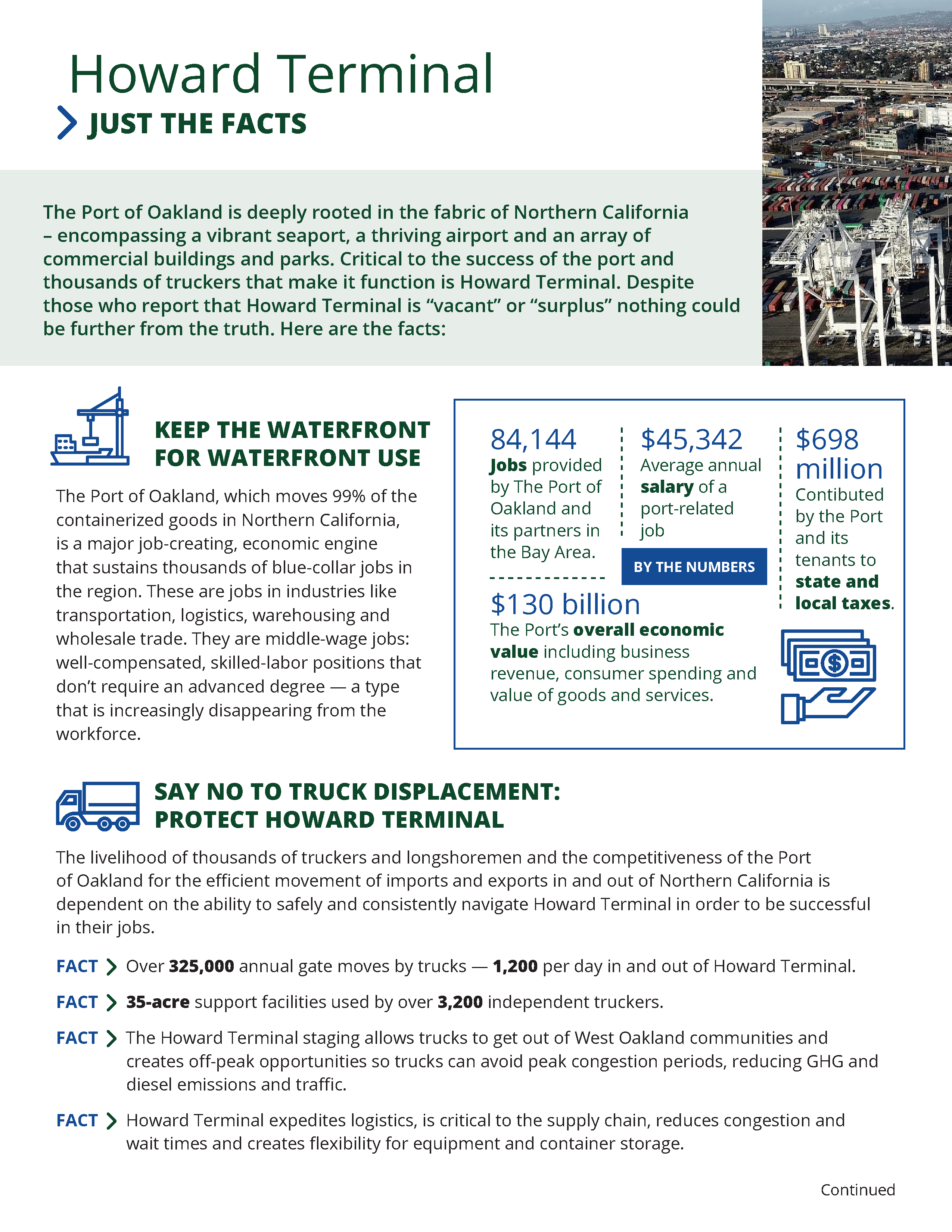 We’re a coalition of longtime local businesses, workers, labor organizations, and Oakland community members who are deeply concerned about the Oakland A’s’ proposal to leave behind their current Coliseum location in East Oakland and build a new stadium in the middle of Oakland’s thriving working waterfront. You can view a full list of our partners here.

Why does this matter?

The Howard Terminal proposal leaves East Oakland behind – taking away the community’s last remaining major sports franchise and offering nothing in return but vague promises about future development. Moving the stadium will also be devastating for our working waterfront. Between the traffic congestion it will bring and the land-use conflicts it will create – there’s no way for this project to proceed without doing irreparable harm to the waterfront and the tens of thousands of good jobs it sustains.

What is our goal?

The Oakland A’s have been part of Oakland’s identity and history for generations, and they’re an important part of our future. Today the City and the A’s have an opportunity to redevelop the existing Coliseum site in East Oakland with a world-class new stadium surrounded by housing, shopping, restaurants, and entertainment. It’s an opportunity to grow jobs and strengthen neighborhoods that have suffered under continuous cycles of neglect, broken promises, gentrification, and displacement.

What are the risks and dangers with the Howard Terminal site?

The site at Howard Terminal is problematic for Oakland A's fans who need to walk through an industrial terrain that is ill-suited for pedestrians and is adjacent to railroad tracks used to transport hazardous material. Moreover, the nearest BART station is over a mile away. A proposed remedy to this situation – a gondola to shuttle fans to the site – is costly, unrealistic, and potentially dangerous. It would be a nightmare situation for police and other first responders to keep the public safe in an emergency while isolated and boxed-in between railroad tracks and the Bay with an aerial gondola as the only means of escape.

Why is the current stadium site better than a waterfront arena?

The waterfront area lacks the necessary public transit and will create extreme congestion from fans attempting to drive to games, resulting in a traffic nightmare along I-880 during weeknights. According to preliminary transportation plans, the proposal would add at least 10,000 cars to the road during game days, and the A’s have not put forward a plan to manage the congestion or parking issues these visitors will cause. The A’s have also demanded $855 million in taxpayer funding for onsite and offsite infrastructure costs and environmental remediation, a level of public funding unheard of in comparable projects and unique to building a luxury commercial development on industrial-use port property. In comparison, the Coliseum is ideally situated near BART, Amtrak, I-880, and the Oakland Airport and could be enhanced with ample parking. It is wildly impractical to move a stadium from an available location with extensive public transportation and parking options to a new location that offers none.

What is the current status of the proposal?

In February 2021, the City of Oakland released the Draft Environmental Impact Report for the project. During the comment period, the City received more than 300 comment letters identifying serious flaws in the A’s proposal and the City’s analysis. It is now up to the City to make the right call and revise and recirculate the EIR.

In April 2021, the A’s released their term sheet, a financial plan for their development, which demands over $1 billion dollars in taxpayer funding to cover onsite and offsite infrastructure, environmental remediation, and the community benefits they’ve been promising for the last two years, while simultaneously skirting their obligation to provide affordable housing.

On July 20, 2021, the Oakland City Council voted to approve their own version of the term sheet, pushing back against some of the A’s outrageous demands and requiring them to provide at least the minimum legally required amount of affordable housing. The A’s have yet to respond to the City’s offer.

What is your stance on the Coliseum being sold to the A’s?

This property is one of the largest pieces of public land in the city, and is a valuable asset that should not be squandered away for a bad real estate deal. The East Oakland community wants to keep the A’s at the Coliseum site and use a new stadium there as a magnet for jobs, housing, and economic activity in a long-neglected neighborhood. Any sale of this land should be dependent on requiring that the A's build a new ballpark in East Oakland, and if not, to return the land to Oakland taxpayers to ensure they are not left high and dry. If the A’s are truly "rooted in Oakland," then they should not abandon their current home to build a ballpark elsewhere.

Is legislation needed for the project to move forward?

Mandates for the San Francisco Bay Conservation and Development Commission (BCDC), the State Lands Commission (SLC) and the Department of Toxic Substances Control (DTSC) preserve important and long-standing safeguards to protect public health, the San Francisco Bay, and endangered wildlife. Last year, the A’s sponsored legislation, AB 1191, which begins a circumvention of this process and opens a Pandora's Box for future erosion of critical environmental protections.